GIVE MUSIC A FUTURE –Without borders!

On 13th June at the State Music Academy in Rhineland-Palatinate (Neuwied, Germany) started the next activity of the cooperation project GIVE MUSIC A FUTURE: The “Without borders” Workshop on audience communication & chamber music (13th to 18th June).

10 prize winners from 9 different countries came & played together. They exchanged and brainstormed about communication – analog with the audience and digital on social media. On 14th June they presented themselves and some of the works they practised at a first Showcase at the Landesmusikakademie. On 15th June they played and presented a big concert at the breath-taking location Castle Namedy that was packed by an enthusiastic audience. On 16th June they held a flashmob in a fitness studio in Neuwied and on 17th they played another final concert at the Landesmusikakademie because the audience didn´t have enough of them! Their musical programme included works by Dohnanyi, Shostakovitch, Brahms, Llamazares, Villa-Lobos, Mozart, Haydn and von Weber.

“Without boders!” Received the patronage of the Minister-President of Rhineland Palatine , where it took place. The workshop on chamber music was led by Prof. Silke Avenhaus, docent at the Munich University of Music and Theater. The communication seminar was held by Susanne Barthelmes, former director of the Menuhin Competition and currently with All Sorted! Consulting. A professional camera team shooted the musicians and prepared short promo videos of each one of them. 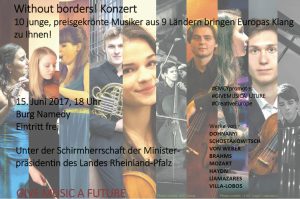 Three of the participating musicians came from Ukraine and Russia. The musicians can compare with each other differently on the basis of the results of the study.

From the 16th to the 18th of June, the mid-term Conference of the partners was held.
Without borders! Is part of GIVE MUSIC A FUTURE, a cooperation project co-funded by the culture program Creative Europe of the European Union. It counts 8 partners of 7 different countries: United Kingdom, Netherlands, Turkey, Lithuania, Spain, Luxembourg and Germany. GIVE MUSIC A FUTURE wants to promote young European musicians with performances in 7 countries, providing them with the essential skills to engage with different audiences all over Europe. They will leave the concert halls and take the music to places where you and I meet. GIVE MUSIC A FUTURE will turn youth music competitions into an interactive experience of art.

We thank the supporters of Without borders

“The European Commission support for the production of this publication does not constitute an endorsement of the contents which reflects the views only of the authors, and the Commission cannot be held responsi­ble for any use which may be made of the information contained therein.”